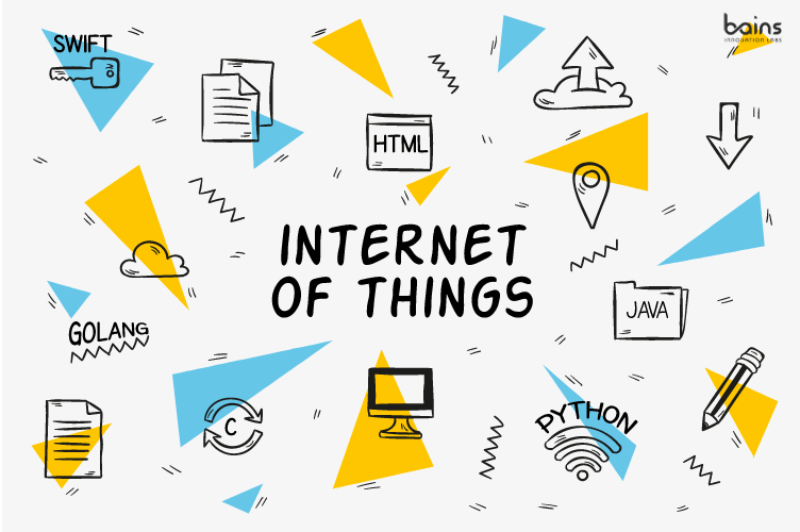 When it comes to IoT development, JAVA stands out among the most popular programming languages.

One of the salient features that make JAVA favorable for Internet of Things (IoT) development is the Write Once, Run Anywhere concept, which implies that compiled JAVA code can be run on any platform that supports the language without recoding. compile it.

In general, JAVA codes are compiled into bytecodes that can be conveniently executed in any JAVA Virtual Machine.

Furthermore, the object-oriented language allows you to create compatible applications for both Edge nodes and the cloud.

In addition, the languages ​​feature several other renowned features, such as an extensive built-in library, highly interoperable, etc. Beneficial for IoT development.

Python is another most recommended supported programming language for IoT development.

The high-level programming language has easier syntax and better code readability, making it one of the preferred languages ​​for IoT by developers.

Also, the language can work on various platforms like Windows, Linux, etc., and can be conveniently integrated with other languages ​​like C++, Java, etc. Also, the language has extensive library support, great community support, and several other features, and is also well suited for data-intensive applications.

Are You Looking For IoT Developers?

C can be considered one of the most widely used programming languages ​​in the world of the Internet of Things (IoT).

The mid-level programming language allows you to understand the underlying architecture of the programming that provides the necessary flexibility to IoT developers. Also, the language has several other prominent features such as portability, a rich library, and many more.

In addition, the language is practically compatible with microcontrollers .required for IoT devices. However, it also takes more effort and time to learn the C language effectively due to its not-so-easy syntax and layered architecture.

Golang sometimes referred to as Go, is also one of the best languages ​​to consider for IoT development.

The language offers several salient features such as built-in concurrency (goroutines and channels) and the ability for maximum hardware usage which makes it more compatible and relevant for IoT development.

Furthermore, the language provides several other crucial features such as a rich standard library, dynamic typing capability, etc. which can also be considered by developers.

Last but not least, Swift !! If we talk about the introduction of the language, Swift is a general-purpose, multi-paradigm programming language that is specifically designed to create apps for iOS, iPadOS, macOS, watchOS, and tvOS.

The language features several salient features, such as powerful error handling, functional programming patterns, fast and security, and many more. However, as mentioned above, Swift is particularly concerned with app development for Apple devices, so if you are eager to do IoT development for these particular platforms like iOS, macOS, etc. We strongly recommend that you opt for Swift, otherwise you can also use other languages.

However, whatever language you choose, you must work hard with all dedication and consistency to achieve your goals.

Being one of the best IoT Companies in Canada, our IoT developers are helping startups, SMEs, and enterprises looking for IoT solutions. If you need support to execute your project, you can contact us.
← What Are The Benefits of Business Process Automation Tips To Improve Your Google Ads Campaigns →
We use cookies on our website to give you the most relevant experience by remembering your preferences and repeat visits. By clicking “Accept All”, you consent to the use of ALL the cookies. However, you may visit "Cookie Settings" to provide a controlled consent.
Cookie SettingsAccept All
Manage consent

This website uses cookies to improve your experience while you navigate through the website. Out of these, the cookies that are categorized as necessary are stored on your browser as they are essential for the working of basic functionalities of the website. We also use third-party cookies that help us analyze and understand how you use this website. These cookies will be stored in your browser only with your consent. You also have the option to opt-out of these cookies. But opting out of some of these cookies may affect your browsing experience.
Necessary Always Enabled
Necessary cookies are absolutely essential for the website to function properly. These cookies ensure basic functionalities and security features of the website, anonymously.
Functional
Functional cookies help to perform certain functionalities like sharing the content of the website on social media platforms, collect feedbacks, and other third-party features.
Performance
Performance cookies are used to understand and analyze the key performance indexes of the website which helps in delivering a better user experience for the visitors.
Analytics
Analytical cookies are used to understand how visitors interact with the website. These cookies help provide information on metrics the number of visitors, bounce rate, traffic source, etc.
Advertisement
Advertisement cookies are used to provide visitors with relevant ads and marketing campaigns. These cookies track visitors across websites and collect information to provide customized ads.
Others
Other uncategorized cookies are those that are being analyzed and have not been classified into a category as yet.
SAVE & ACCEPT
Sign Up For Our Professional Plan
Sign Up For Our Part Time Plan
Sign Up For Our Ideation Plan
Let's Talk & Make Things Happen
Upload Your Resume & We Will Contact You
People Ignore Design That Ignores People. How's Your Design?
Not Happy With Your Website? Let Us Help You
Sign Up For Our Basic Plan
Sign Up For Our Business Plan
Sign Up For Our Professional Plan